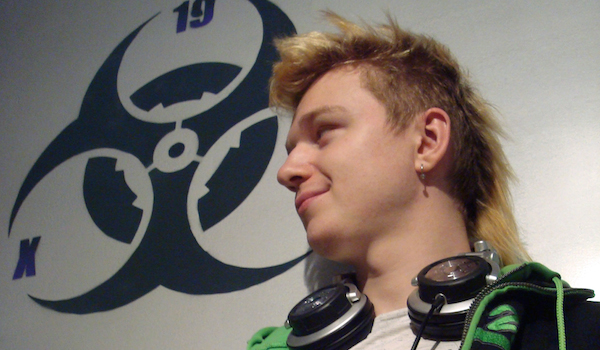 This week on the show we have a very big mix from Virus19xx! His stuff is quite hard and heavy normally so I tend not to play much of his stuff on the show, but the mix he’s done for us shows some amazing depth in both music and skills – and is damn cool.

Moscow DJ/Producer/Promoter/Manager Nick Nightingale aka Virus19xx took up playing music in his early childhood. When he was 6 years old he started attending music school. By the time he finished it, he got interested in electronic music. The first tracks he was really crazy about were the soundtracks to the video games. Then he got to know about such musicians as Moby, FatBoy Slim, Dolphin, The Prodigy, The Chemical Brothers, The Crystal Method, Orbital and others. At that time Nick realized that his soul would belong to breakbeat. Certainly, Nightingale didn’t limit himself by break only. He listened lots of hard electro styles such as techno, psy, D’n’B, hardcore & some of rap.

In 2004 Virus19xx did his first experiment with music, which resulted in some unusual bootlegs & mixes that contained hardest and most expressive tracks from monsters of breakbeat. Its selections was very unusual and rare for that time, especially for Russia. By that time Virus19xx had became a leader of BREAKBEATZONE (Russian BreakBeat Community). His production was shown only for members of this community.

In 2008 Nick became a chief-promoter of BREAKBEATZONE project with creating BBZ Promo group. Nowadays it is the main Moscow breakbeat party-project. Also label BBZ was founded. Nick 19gale is its contract holder, administrator and manager.

“I never chase for newness. First of all you must be in full swing because of music. I always try as many variants of material presentation as I’m able. Very often interesting solutions come to my mind even when I don’t wait for it at all. Sometimes you just walk along the street, imagine what sounds you can combine with each other and understand that you can record a cool mix. I never stop on the way of self-improving and always lead my skills on a new level.”

Nowadays, Virus19xx continues his work with music. He always seek new material and tries to find out and create the most exciting and brain-exploding materials for mixing and production.

The 1st official school teacher of EDM in Russia and the most savage tech-punk DJ.

Here’s the show – big respect to Nick aka Virus19xx for laying down a massive mix with some personal faves in there – very well mixed too. mine bit was a little random with some old and new stuff – enjoy!